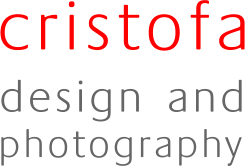 The SMART Micro Project Award gave me a year and £10K to build and test a working prototype of a rowing catamaran.

The project was scary: full of unknowns, with a great deal to learn very quickly. But it was also very exciting – it was my first opportunity to realise a new product idea from scratch.

Although I was able to match the SMART award funds with a legacy, it was evident that money would be extremely tight.

Achieving those objectives would represent an unparalleled combination of features in one boat, but there was more. Competitive rowing in my teens had damaged my back and I wanted to devise a rowing mechanism which was less likely to result in back injury.

The sliding seat rowing stroke is an abomination – if you tried to lift weights in a gym the way you are supposed to haul on an oar, your trainer would have a fit. Apart from that, thrashing a heavy body back and forth in an ultralight boat is absurd – you will have seen how racing boats stop and start as momentum and thrust fight it out. In fact, the marginally better sliding rigger was invented at about the same time as the sliding seat at the end of the nineteenth century but, as often seems the case, the inferior system prevailed.

The ROCAT rigger has a fixed seat and the rower’s back is properly supported. The rower’s legs provide most of the power, as they should, and the arms finish the stroke. But this device was all new and I had no idea if it would work, or how best to achieve it.

Also, what would the optimum length-to-beam ratio be for the slim, very low-drag hulls? While the stability and hydrodynamics of the boat would benefit from a wide beam, the structure would prefer it to be narrow. In the end, eye and intuition determined the proportions and they work well.

A boat CAD program helped me to design the hulls, and a length of 4.5m was chosen on the grounds of transportability. I cut the ‘stations’ (cross sections) out of ply and took them to ACMC (Advanced Composites Manufacturing Centre) in Plymouth who used them very expertly to shape up a plug (master shape). From this they took two half-moulds and moulded two hulls.

Penzance boating pond, which I had used to compare various scale-model hull forms, was perfect for testing the buoyancy water-line and centre of buoyancy of the new hulls.

The pictures below show the evolution of the seatdeck and rigger. 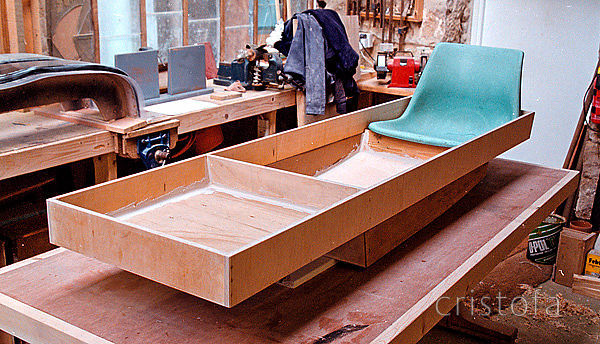 ROCAT proto-1's first seatdeck - to begin with the footbar runners were on the sides of the seatdeck, but these were not strong enough to take the horizontal rotational loads on the footbar

ROCAT proto-1's first seatdeck - the runner moves to the centreline using a sailing sheet track, but it doesn't work because the loads are in the wrong direction 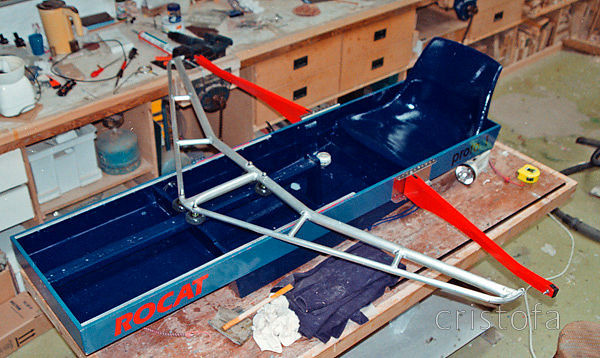 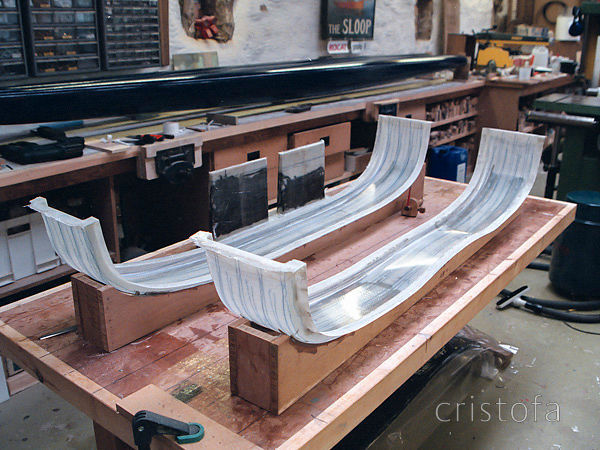 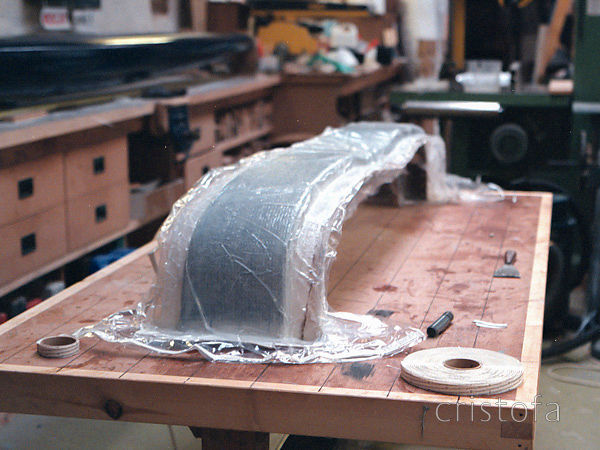 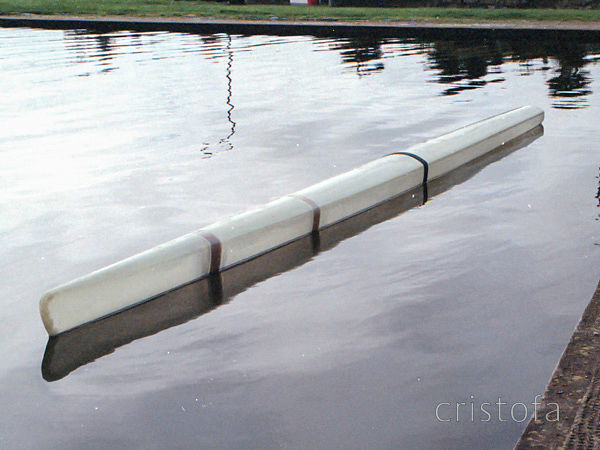 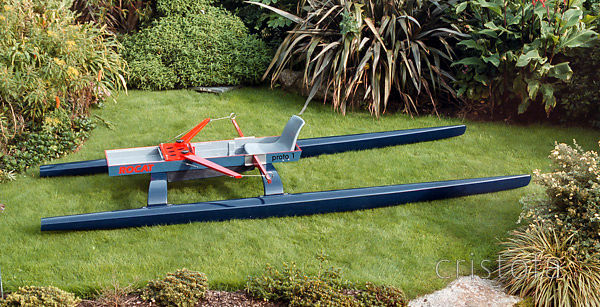 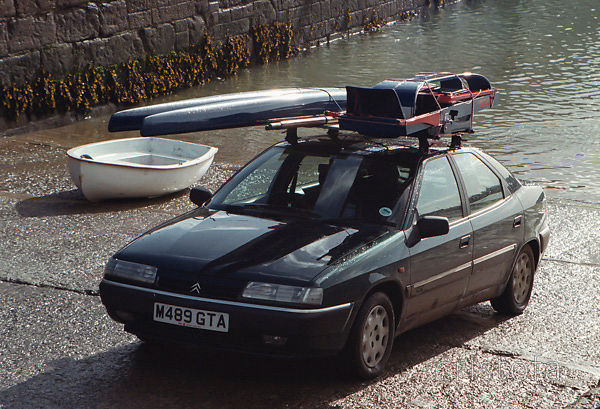 ROCAT proto-1 on a car roof 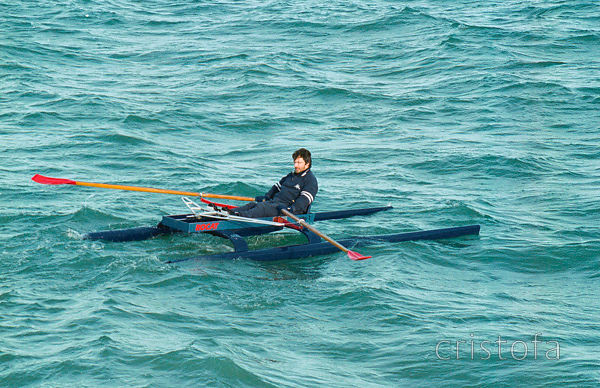 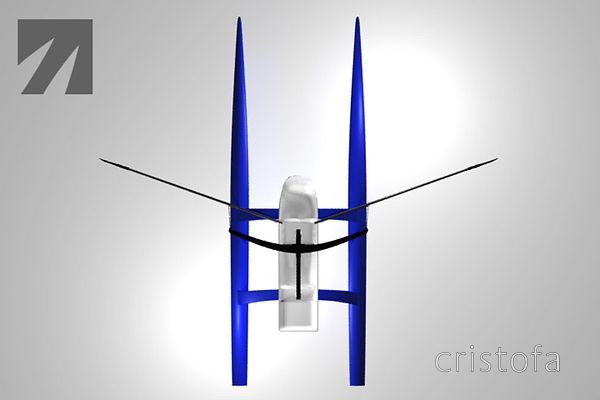 An animation of the ROCAT stroke 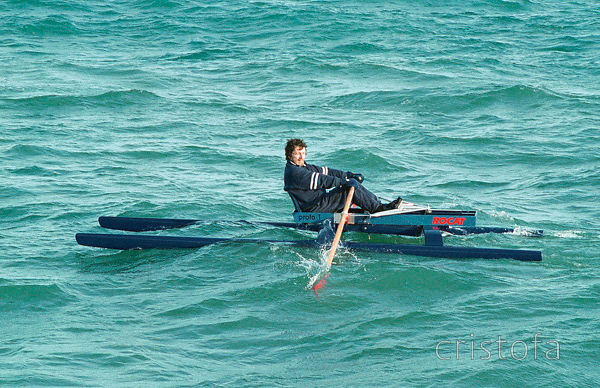